A mobile Converter on an Apple device?
Nothing is as powerful as an idea whose time has come. – Victor Hugo.

This is the case of Apple’s small range of products: the iPhone, iPad and iPod, as well as the computers and other desktop products. The mobile products have so wowed the whole world and company IT departments are picking up the iPhone/iPad one after the other as it has not only proven to be the app of choice for the employees, but also robust with smart capabilities built around security.
And with hundreds of thousands of apps available for these devices, it is no wonder it becomes daunting trying to determine what app best suits the iPhone in the pocket and nimble in the hands, or the more handy iPad interface.

It is nice to be able to know how much Euro’s you’ll get out of a Dollar as you’re moving along, or size of a t-shirt is equivalent to the named size “Medium” when you’re holidaying in Europe. …and more. The question is whether it is nice and comfy to swing the iPad around in both hands trying to ‘tap’ out the necessary conversion, as we may well require it while standing or moving.

The 2 apps to consider for example are TopConverter for the iPhone and Clothes for iPhone/iPad (see pictures below).
TopConverter incorporates a lot of measurement conversions and even includes the clothes converter, but while a few taps will produce required results for most of the other conversions, Clothes conversion involves quite a bit of drum-rolling and is slightly clustered on the iPhone. This of course lends to the larger visuals and handy gestures that we have come to love for the iPad.

So is this the general ‘take’ for most people?

Maybe an aggregated opinion pool detailing what individuals like to do with the iPhone versus the iPad will be a great help. 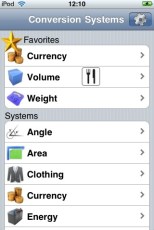 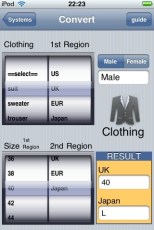 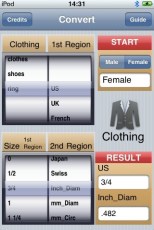 2 thoughts on “Is a Converter App suitable for the iPad?”